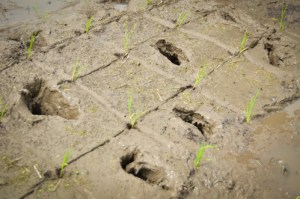 “Transformation at the Grassroots” –40 Years of Walking with Rural Leaders

As part of the events celebrating its 40th anniversary the Asian Rural Institute is planning a commemorative ceremony and a symposium this September. We are expecting many graduates from around the globe to participate in that day.
We invite you to join our program, to celebrate the course of our forty years long history and to look into the future steps of ARI.

We will soon be going into our fortieth year of operations. Thinking back over the past five years, we started our preparations for this anniversary back in May of 2008. However, as we were in the middle of rebuilding the Farm Shop, eastern Japan was struck by the March 2011 Tohoku Earthquake. It’s been two years since we had to shift our focus from 40th anniversary matters to post-earthquake reconstruction projects. We have also found ourselves heavily involved in the as yet unfamiliar issue of radioactive pollution. Nonetheless, the amount of support we received both from within Japan and abroad far exceeded anything we imagined, and we have managed to rebuild important buildings one after another. Furthermore, in this 2013 training year in which we truly celebrate the 40th anniversary, we look forward to welcoming the 41st class of rural leaders in our freshly rebuilt Koinonia House (dining hall) and classroom building. In other words, the 2013 training year will be the first full year in which we will use all new buildings start to finish.  2013 will not simply be a year in which we celebrate a date when we turn 40. Rather, it will be a very special year that will serve as the first step into a new era for the Asian Rural Institute.
In these forty years, ARI has taken “That We May Live Together” as its motto, and successfully targeted grassroots level groups. People from harsh conditions in rural communities around the world have risen up despite poverty, violence, conflict, discrimination, persecution, environmental degradation, and natural disasters, wanting to live hope-filled lives in communion with their neighbors, nature, and God so as to build a world of peace. In order to enable them to build this kind of world from the grassroots level, ARI has trained countless rural leaders from 56 countries. Those graduates have brought about transformation in many different forms in their respective communities. ARI continues to watch over their progress and results, cheer them on, brainstorm, and provide support.
During this fortieth year since our establishment, we would like to invite our graduates who are doing especially striking work to reflect on the transformation and reforms they and the other graduates around the world have enacted. What did they study here at ARI, what have they accomplished, and what are the changes they have brought about in their communities? The things that they come up with will be the best things to reaffirmation of the objectives of ARI both around the world and within Japan.  Furthermore, over the course of this year, we would like everyone to carefully consider the new reforms our unrelenting world needs. In other words, we need to consider what kind of rural leaders ARI needs to raise now, and this will serve as our compass for the coming era. We look forward to your continued support and input in this discussion.
(Tomoko Arakawa, Managing Director. Translation by Britanny Partin)