Showing posts from April, 2012
Show all

Post a Comment
Read more
April 23, 2012
In Appreciation of Philanthropic Visionary Tadashi Yamamoto04/18/2012 By AsianPhilanthropy.org By Barnett F. Baron
President & CEO
Give2Asia
Tadashi Yamamoto, founder and president of the Japan Center for International Exchange, passed away on April 15 at the age of 76. He was an extraordinary person whose career was marked by extraordinary accomplishment. He was a liberal internationalist, an optimist who believed wholeheartedly that cultural
exchanges and dialogue could bring peoples and nations closer together, especially those that previously had been adversaries. He believed that people-to-people exchanges in all their forms were a formidable vehicle for international understanding and peace. He committed his life to interpreting Japan to the world
and the world to Japan.
RED MORE HERE
http://asianphilanthropy.org/?p=1887

A fascinating, edgy, very dark comedy. The script is excellently written, presenting a combination of disturbing and humorous material, but I do need you to be aware that there is dialogue about child torture and killings. The cast is top notch and the directing thoughtful, creative and engaging-- but even so-- not meant for kids.

Reserve in advance by sending your name, the number of tickets you would like and the show you would like to see by emailing BST at tickets@blackstripetheater.com
THEATER IWATO Access information – directions from the closest stations From Iidabashi station (about 7minutes) JR line – Sobu/chuo line – Take Kagurazaka Exit Tokyo Metro/Subway, – Tozai, Oedo, Yurakucho and Namboku lines – Exit B3 Walk up Kagurazaka, on Waseda street for about 5 min. until you reach Okubo-dori At Okubo-dori and turn left. Walk straight for 2 minutes you will see Th…
Post a Comment
Read more

Defining Actions, a half-day symposium on the challenges facing the Tohoku recovery.

April 12, 2012
Harvard Club of Japan invites you to Defining Actions,a half-day symposium, where YOU share ideas, best practices, and solutions to the challenges facing the Tohoku recovery.  Creative and brilliant speakers will shake up your brain cells on Sunday morning.  Open to the public.
REGISTRATION FEE ¥2,000  Adults
¥1,000  Full-Time Students (Bring your student ID)
Registration fee covers travel expenses for Tohoku speakers, and tech equipment.  Remaining profits are donated to Tohoku recovery projects.
SO YOU WANT TO ATTEND Register by emailing Junko at junkokim@post.harvard.edu.
INCLUDE: 1) Your full NAME  2) Affiliation (student? company? volunteer?)
Post a Comment
Read more

April 09, 2012
日本財団国際フェローシップ http://www.nippon-foundation.or.jp/inter/fellowship.html great chance for Japanese people in their 30's who want to or research overseas グローバル化の進展により、社会のあらゆる側面において新たな思考と取り組みが求められる中、国際的な環境の変化とニーズに的確に対応できる識見と能力を持つ人材の育成が日本社会の喫緊の課題です。 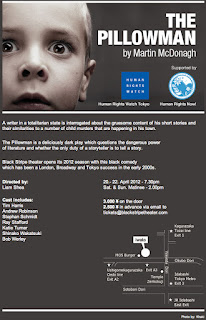 Black Stripe Theateropens its 4th season with The Pillowman by Martin McDonagh, Directed by Liam Shea.

BlackStripe Theater presents
The Pillowman, by Martin McDonagh Venue: Theater Iwato
Ticket prices: ¥2,500 in advance, ¥3,000 at the door
Cast Members:
Timothy Harris, Andrew Robinson, Stephan Schmidt, Ray Stafford, Katie Turner, Shinako Wakatsuki & Bob Werley
Reserve in advance by sending your name, the number of tickets you would like and the show you would like to see by emailing BST at tickets@blackstripetheater.com Theater access and more information: http://blackstripetheater.com/?page_id=341

"An Unprogrammed Life” Adventures of an Incurable Entrepreneur

April 06, 2012
The 2012 Katerva Awards spotting season is in full swing!  Our entire network has been mobilized and is focused on gathering paradigm-busting ideas at the intersection of innovation and sustainability.

As part of the Global Spotter Network, you play an important role by identifying and nominating the best programs on the planet for recognition and award.  The process is simple: out of the hundreds of ideas that you may be exposed to every year, recommend the one or two you feel are truly revolutionary.  Simply fill out this short nomination form to recommend ideas, initiatives, projects or businesses for the Katerva Awards.  We ask you to provide basic contact and descriptive information about the organization as well as the core principal that makes your nominee a “game-changer.”  That’s it!  Leave the fact-finding and validation to Katerva’s Research Team.

April 06, 2012
Starting on Friday April 6, Give2Asia will launch Link2Asia, a weekly roundup of news from the third sector in Asia. Link2Asia will be available each week on Friday morning in the headlines section of our blog.
Post a Comment
Read more

April 06, 2012
Clinton Honors Give2Asia Partner Chintan
Secretary of State Hillary Clinton honored Give2Asia partner Chintan for its work placing waste pickers from Indian slums into schools and safe jobs. Waste pickers earn a living by salvaging paper, plastic and metal from waste dumps and selling it to recycling centers. Chintan Environmental Research and Action Group was one of three organizations honored with the Secretary's Innovation Award for the Empowerment of Women & Girls in Washington D.C. last month. "Chintan's efforts have reached more than 20,000 waste pickers in India in the past five years. More than 2,000 children have been pulled out of the trash heaps and put on a path toward education and opportunity," Clinton said.
Read more about Chintan by clicking here.
Post a Comment
Read more
More posts