Showing posts from February, 2013
Show all

February 28, 2013
The microgrant competition for Rising Voices, a project of Global Voices Online.

"Rising Voices seeks project proposals that share our mission of bringing voices from new communities, as well as underrepresented language groups to the online global conversation through the use of participatory citizen media. The project's primary activities should be to provide citizen media training workshops to the target community, as well vital ongoing support and mentoring. Please see our roster of current and alumni grantee projects for examples of previously funded projects."

February 27, 2013
On Friday 3/8, as part of our celebration of International Women’s Day (IWD) meeting attendees will have a chance not only to hear our fabulous
speaker Suzanne Price, Representative Director of Price Global, Entrepreneur winner of British Business Awards speaking about Women’s Leadership but also the opportunity to talk one-on-one with other empowering female leaders here in Tokyo. Join us and meet many wonderful women making things happen here in Tokyo. Please rsvp to membership@fewjapan.com to save your spot, as this is going to be a very popular event and we have space for only 50 attendees. Since this is a Friday night we have extended the monthly meeting time so we will finish at 11pm - giving us an extra hour of networking and open bar. We will have have some special women’s day door prizes and information on other IWD events.  Its sure to be a special night so come celebrate IWD with FEW! find out more and spread the word! Visit the FEW website for more information h…
Post a Comment
Read more

Mark your calendars for March 17 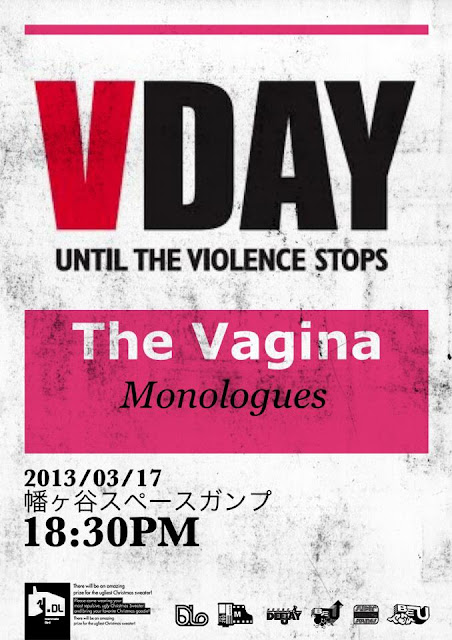 February 21, 2013
Suicide Prevention Workshop March is suicide prevention month in Japan and TELL will be holding a suicide prevention workshop on Saturday, 16 March. Please help us promote this program, which can and does save lives. The workshop is suitable for the whole community and will help you become better at identifying and supporting those at risk. The course covers common causes of suicidal behavior, warning signs, how to talk to someone who may be suicidal and how to get someone in crisis the necessary help they need. To sign up, contact Jason Chare at lifeline1@telljp.com
Date: 16 March 2013, 2 pm - 5 pm
Place: Wesley Center, Minami Aoyama, Tokyo
Length: 3 hours
Target audience: General community MAP Suicide is an issue many of us are uncomfortable to talk about and have trouble understanding, leaving most of us with insufficient and incorrect information about the issue and how to best support those in need. You too can save a life. With over 1 million people world wide taking their own…
Post a Comment
Read more

February 19, 2013
Grant Proposal Writing for Nonprofits/NGOs (One-day Workshop) Day/Time: Saturday 10:00-16:30
Date: April 6th
This workshop will focus on how to write and submit a proposal to an international grant making foundation for a specific nonprofit NGO project. First we focus on doing research and getting information on foundations and the actual process. Then we focus exclusively on the step by step writing of the grant proposal. Each participant will come out of the workshop with a completed proposal outline. This will be an interactive workshop aimed at people with little or no experience writing project or funding proposals. Participants will be divided into project groups in order to create complete proposals.

February 16, 2013
FLY ON THE WALL PRODUCTIONS is producing a documentary entitled, “For the Sake of the Children”, a 20 minute film that looks at the impact that the WWII Japanese-American internment had on mothers and how they raised their children during their incarceration and after.
Additionally, this film will examine the impact that the internees' parenting had on their children and on the generations that followed - in particular the challenges, struggles, and circumstances that individuals from each subsequent generation have faced in shaping, integrating and reconciling their identities as Japanese-Americans.
WE ARE LOOKING FOR PEOPLE OF ALL AGES TO SHARE THEIR EXPERIENCES WITH US
In particular…
1) Nisei women who gave birth to children while at camp or who raised children up to the age of 12 while at camp
2) Sansei women and men who were born while at camp or who were children up to the age of 12 while at camp
3) Yonsei women and men whose grandmothers were internees
4) Gosei women and men who…
Post a Comment
Read more

Registration deadline: March 1, limited to 15 people only so sign up now!
To sign up, contact info@osc.tsuda.ac.jp  Find out more http://osc.tsuda.ac.jp/course/titp.html
対象
実践的なマネジメント・スキルを向上させたい方、民間団体及び国際協力関連のプログラムを担当されている方、またはマネジメント・スキルに関するさまざまなノウハウを求めている方 講座の内容  PRの方法、スタッフ・ボランティアに関するマネジメント、組織内で起こる日常的な課題や、基本的な資金調達方法等を学びます。   Course Format: This course will be run in workshop format, including presentation, group discussion, pairwork and simulation activities. Language: All course materials are in English and classes will be conducted in English. Most class presentation and discussion will take place in English but may also take place in Japanese. All evaluated materials should be submitted and presented in English. Language Requirement: High intermediate and above (spoken and written English). Evaluation: Participants will receive a pass if they fulfill the criteria for passing: attendance, class preparation, ac…
Post a Comment
Read more

February 08, 2013
LIVE YOUR DREAM: THE TAYLOR ANDERSON STORY
Date:Wednesday, March 6, 2013Time:Door opens at 6:30pm, Program starts at 7:00pmVenue:Temple University Japan Campus, Mita Hall (access:http://www.tuj.ac.jp/maps/tokyo.html) Speaker: Regge Life, producer/director of documentary filmsModerator: Kyle Cleveland, ICAS Associate Director Admission:Free. Open to publicLanguage:EnglishRSVP:icas@tuj.temple.edu * If you RSVP you are automatically registered.  If possible, we ask you   to RSVP but we always welcome participants even you do not RSVP.
* RSVPなしでも参加できますので、直接会場へお越しください。
Overview

LIVE YOUR DREAM: The Taylor Anderson Story chronicles the life of Taylor Anderson from her childhood in Richmond, Virginia to the catastrophic events of March 11, 2011.
Taylor was a JET teacher, an English language assistant teacher in Ishinomaki Japan. When the earthquake struck, she helped to evacuate the children from her school to higher ground in anticipation of a tsunami. Once the kids were safe, Taylor realized…
Post a Comment
Read more

Please note : this is a special American Chamber of Commerce in Japan/TUJ event held at Temple University.
There is a Y2,000 fee and registration is required at icas@tuj.temple.edu as
space is limited.  It includes a light meal. The event will start at 18:30 and
end at 21:00

In terms of making corporate governance more effective world-wide, what were the lessons of the recent financial crisis? What specific techniques can and should modern boards use in order to be not only more effective in the short-term, but also more accou…
Post a Comment
Read more

February 03, 2013
Special Feature: The Top 100 NGOs 2013 Edition by The Global JournalJanuary 23, 2013
the second edition of The Global Journal’s Top 100 NGOs ranking. In introducing the inaugural list, we began by asking: just what is a non-government organization? On this, our definition remains the same – an operational or advocacy-focused non-profit organization active at the local, national or international level.
find out more here
http://theglobaljournal.net/article/view/986/

The official United Nations theme for International Women's Day 2013 is "A promise is a promise: Time for action to end violence against women"