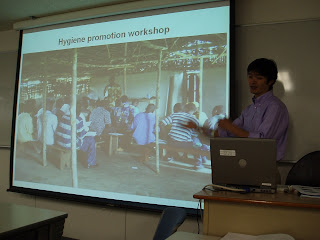 On Nov 17, Marc Saito from Peace Winds Japan was a guest speaker at my TUJ course on the Japanese nonprofit NGO sector .

After introducing the organization and the background info - he foucsed on two areas he has been involved in - Water and education support in Afghanistan and Liberian refugee support in Sierra Leone.

Everyone learned so much about what goes into developing an emergency relief project. We understand the difficulties people in the field face but the real face of it is hard to imagine. His sharing of his own experiences has invaluable. 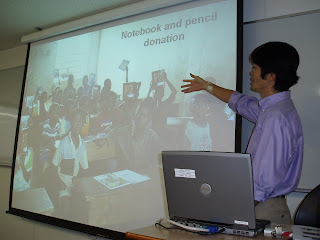 Support from governments and the public in places where security is an issue is something many of us had not thought deeply about before this talk.

In the talk about refugee camps it also became clear to us all that one of the most difficult parts is resettlement. there is little funding or government support for this long process which is integral to the establishment of stable communities. 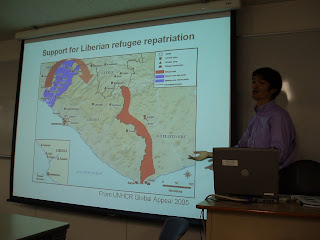 There also seems to be a misconception that people's lives in refugee camps is a easy and happy one so people hesitate to go back home where they have to work for food. As Marc explained - EVERYONE want to go back home. Refugee camps are crowded with strangers and may be squalid - although they may have functioning schools and police forces. 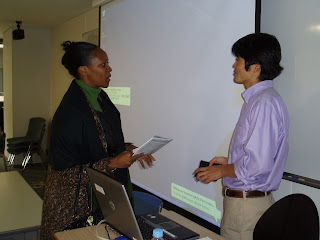 But there are problems in going back home - in all likelyhood there are no schools, no medical clinics and no infrastructure. Parents may want to leave children in the camps for educational purposes - until there are schools set up in their home towns which have been devastated due to conflict or disaster. They understand the value of education and work for the betterment of their lives and happiness of their families.