October 31, 2007
Oct 30 started with a review of key events between now and the G8 with the expectation that we select 2-4 dates for common action/campaigning. These were to be events that were of international significance and not limited to some of any nations.

Key goals were for the launch of the campaign, a mid-term point and just prior to the G8.
to the right is the sheet explaining the goals and principles of the G8 NGO forum for 2008 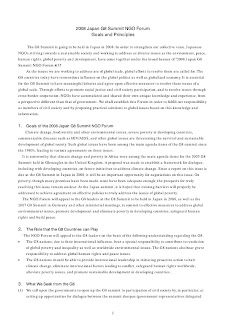 A fellow from Germany did an extensive talk on the advocacy and lobbying methods. This was very interesting and very comprehensive. It gave me many ideas for our

The overview of the different collations and networks in Japan was a bit confusing to be sure. While introducing organizational priorities, point people and structures sometimes I felt people were a bit lost as to why with so many small groups did Japan need so many different network groups which often had many of the same members. I found this to be very informative and useful for giving a base to all discussion that would follow.


The key point missing from this was the rational behind the creation of these overlapping networks. The key groups introduced were JANIC, Hottokenai, TICAD, and the NGO forum. After focusing on the different groups and their structures, an overview of the campaigns and plans groups are working on/developing over the next year was introduced.

Reviewing these Japan-based networks, activities and campaigns will 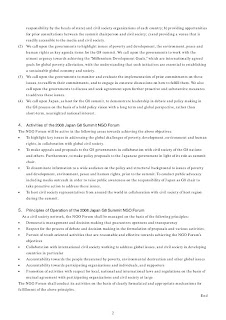 give us all a better idea as to where to focus the global activities. Given the wide array of groups involved in various campaigns it was generally agreed that we needed to develop a unified message and outreach plan to mobilize the public.

The NGO meeting on Nov 6 will play an important role in making many important decisions.

In the final sessions – which I could not attend due to work – 3 or 4 key events for the campaigns were selected and a formally agreed upon communiqué was drafted by the end of the face to face meeting. Will try to post it when I see it

donating for groups doing relief work in the the Philippines

Humanitarian Coalition The Canadian aid coalition of CARE, Oxfam, Plan Canada and Save the Children have been working with its member agencies on the ground in the Philippines since the disaster struck.
Global Medic The Canadian emergency-relief charity has departed for the Philippines and is focusing on water-purification in the affected regions. Canadians looking for information on friends and relatives who may have been caught in the affected areas can call Foreign Affairs’ 24-7 Emergency Watch and Response Centre at 1-800-387-3124 or 613-996-8885.
The mGive Foundation is collecting donations from U.S. wireless subscribers, who can text AID to 80108 to give a $10 donation to the organization’s Philippines Typhoon Disaster Relief Fund. Charges will appear on the user’s wireless bill or will be deducted from a prepaid balance. Text STOP to 80108 to stop or HELP for assistance. Full terms…
Read more