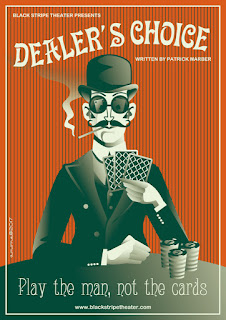 Dealer's Choice, Patrick Marber’s debut play, was first performed at the Royal National Theatre (Cottesloe) in London in February 1995 starring Ray Winston, and it won both the 1995 Evening Standard Award for Best Comedy and the Writers' Guild Award for Best West End Play.  A 2007 hugely popular revival of the play at the Menier Chocolate Factory was transferred to the Trafalgar Studios and was nominated for several awards.

The play is set in a restaurant in London and follows the lives of six poker addicts – Carl, Sweeney, Ash, Frankie, Stephen and Mugsy. The action takes place over three acts and the third act is set around the poker table.  The play is about fathers and sons and the emotional deficiencies of men addicted to playing poker.

‘Play the man not the cards’. Though this play is about gambling, it’s really about desperate lengths people go to get what they want. A drunk trying to stay sober, a dreamer trying to aim high, a teacher trying to control his class, a liar trying to evade responsibility, a loser trying to win big and an old-pro trying prove his worth.  This play has something for everyone – and it’s very funny! 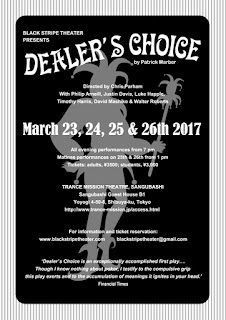 Black Stripe Theater are a group of actors, directors and designers who stage contemporary plays in English in Tokyo.  2017 marks the 10th anniversary of BST and Dealer’s Choice will be the company’s 20th production.

Tokyo Community News
A monthly English nonprofit, NGO, education program and events listing. Schedules and locations are subject to change so please confirm with the coordinating organizations.
Please send in your event information by the 25th of the month for inclusion.View this email in your browser

Was this forwarded to you?
Sign up here http://eepurl.com/bsmQ2r
2016 Year End Tokyo Community News
Read more